Wishlist the game on Steam to be notified when it comes out -  https://store.steampowered.com/app/1285060

This is the 2nd prototype of the full game! Follow the development -  https://discord.gg/zGwhYvd

Winter Falling is a strategy roguelike inspired by FTL and Total War. The undead are coming - only you can stop them. Travel across the crumbling empire. Gather support. Make enemies. Lead troops in tense tactical battles, just you and your brain against the dying world... Make maps in the map editor, challenge friends!

Copyright 2020 Arkadiusz Rębacz. This item is not authorized for posting on Steam, except under the Steam account named Arkadiusz Rebacz.

what font are you using for the title, it looks familiar

Ah, I played this game few months ago and have problems with find it now. Nice game. Definitely better than last season of GoT ;)

I got a really pathetic score of 1

I just don't understand the coin pacing at all. You can have like, at most, two units each round if you want to get to the end, assuming you take all of the coin upgrades and save all peasants, and even then you're going to barely finish with about 0 coins. It robs the strategy aspect of the game when coupled with the similarly anemic movement. Pretty tedious.

Bro why is the music so good

ran out of money

spending too much money on hiring all troops maybe

Hey I'm really hyped for this game and I see that it was delayed on steam. Just know that we support you! I can't wait for this awesome game that you are making. Take your time and knock it out of the part! <3

heeeey I've been following this game for a lot of time and its awesome the amount of things added in this version, it is really and it breaks my heart every time I have to disband a unit (i kinda miss the great scale of the previuos versiun though, and the epic of fighting a battle you know you can't win).

I have a comment. The health bar display system on the old prototype was better. I don't like the health number constantly appearing and disappearing for this one. It's confusing

If you place horsemen down near troops then, before starting the battle, fire them, their +1 move buff still stays.

wait a minute if i use call to arms near the king and then use break free...

I KNOW TOO MUCH

This game is so fun

You can beat the game with only peasants wow

I would love if it was possible to give orders while the pause is on, like in FTL.

it stucked on "downloading 90%"

This is a great game,but how do I earn points??Because I cant get farther than the second battle ,and is their a way to restart the game?

Well you earn coins for every battle! Later on also for rescuing civilians. And you can reset the game when you press SpaceBar or pause the game during any battle. There's a button that says "Clear Save Data"!

But, when I am clicking space bar nothing happens.I dont have any credits and so cant start a battle and so I am not able to restart

You can disband unitys for more credits. Remember, you don't need to hire every single unity to win. Heroes, swordsman and catapults/longbows will easily get you through the first few levels with some good strategy.

Lol I accidently wrote unity instead of units I've been using unity game engine for WAY too long.

Well since the dev is here I want to tell you personally that I absolutely LOVE the style of the game, it's quite unique. However, the coins system could use some rebalancing as new players tend to go bankrupt before they reach the boss. There should be a tutorial on managing the currency. I also loved the first Winter Falling, it was a fair challenge but I somehow got to the top of the leaderboard (I think)!

This is a pretty fun and very polished coffee-break strategy game.  I really like the clean iconographic aesthetic, and it feels great when your tactics work out just right and you slaughter the entire enemy force with no losses.  The special orders are really satisfying to use and can really turn things around when used wisely.

I wasn't a big fan of the extremely limited movement, as it made the game feel more like tower defense than what I was expecting; this was particularly frustrating when it came to rescuing peasants.  I also found the economy to be very strict, but I assume this is working as intended to put a lot of pressure on unit deployment and dismissal.

I think a possible area for improvement would be in how to play.  I had no clue what I was doing at first, and it took some stumbling to work things out.  There are some mechanics that I'm still not clear on, like how the special orders (e.g. Dragon Breath) are unlocked, how the "reset cooldown" banner works, or exactly what I earned from saving peasants (I think a popup hint said they give you gold, but I still always had virtually nothing after each mission).

Each peasant you save gives you one coin. The special orders require tokens to use, which you get from killing the enmies with the round tokens in the corner of their icons. Banners activate when you move units over them. And try to use the upgrades tab to get gold.

Whoa, love this game! The aesthetic is unique and feels great. I love that it feels like you are looking at the battle from a map, like you really are the general of these armies making orders from afar. The mechanics are really easy to grasp, and the progressions feels good. When I was in a tense battle and got to use some of the powerful abilities at a crucial moment, it felt awesome! The UI and music are also very well done and fit the theme perfectly. The only thing that really hung me up for some reason was the icon on the map screen that was pointing at your next battle, I don't know why but it took me a little while to figure out what to click on. Maybe adding an outline to the icon you need to click on to make it stand out would help. Definitely wishlisting this! Would also love to see it on mobile so I could play on the go :) Great job!

Saw that flash player went down so decided to see if i could find some games from my childhood that weren't butchered and found this. Really loved it. Keep it up!

Very nice game! Got a score of 56. The mechanics felt more streamlined than in the earlier version.

I finished this good game many times, and you made a very great job. But i noticed an thing:

The Unit Veteran « Heavy SwordsMen » is too cheat, just with that and the trenches, you can win the game too easily

Edit: If you, players, want a hint for the last difficulty, try light spearman and trenches because they are a VERY good strategy, The spearmen’s attack deals 2 damage and is fastest than the enemy, and they not have a too expensive cost, with this strategy, I win the game another time with 204 in score

(Sorry if my English is bad, but i’m a french player, and I really wanted to tell to the dev they doing an good job)

Do you have an html version of this? I'd love to put this on my website.

1 this is from almost 4 months ago so idk why respond now, and 2 i was gonna give full credit and leave a link to here but nevermind i guess

you're not even the dev so idk why you'd care anyways

Very nice game! But I kinda feel the final battle is easier than the previous :/

I beat the game archers only. Just two archers and a score of 789! Beat that! lol I love this game! Great job creating it! 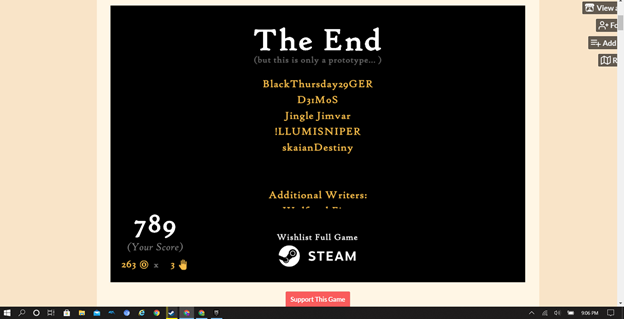 Thank you! Well done on that score, impressive!

OH god, how have you got that score that's amazing!

Took me a few days, but here we go. Your turn again ;-) I think another 30 or so points should be possible if you get the upgrades in the right order. 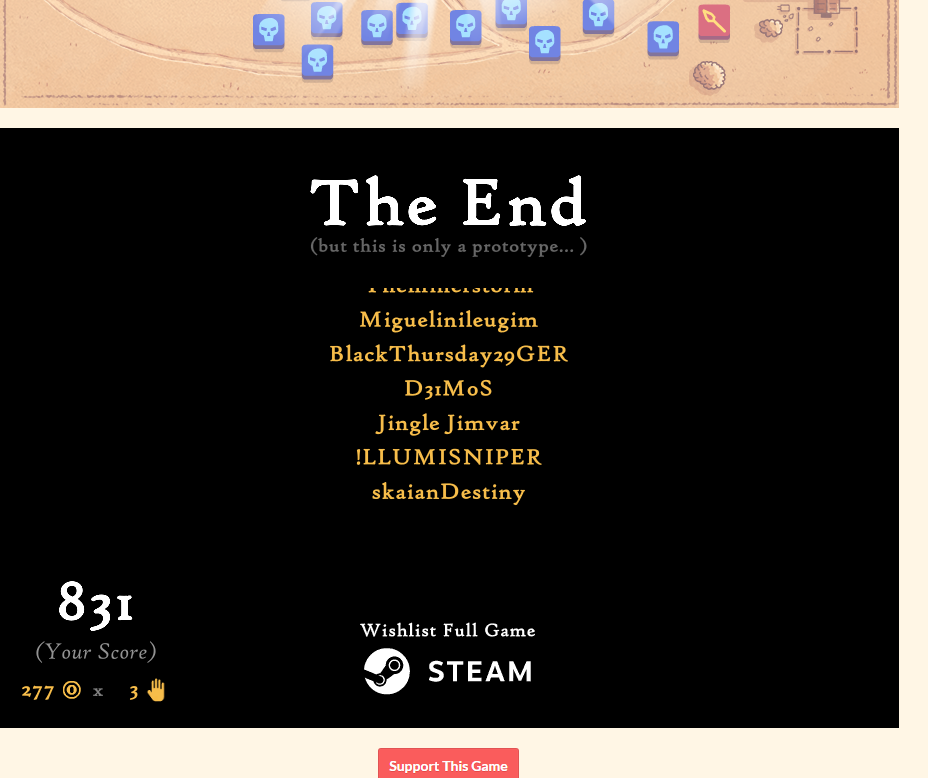 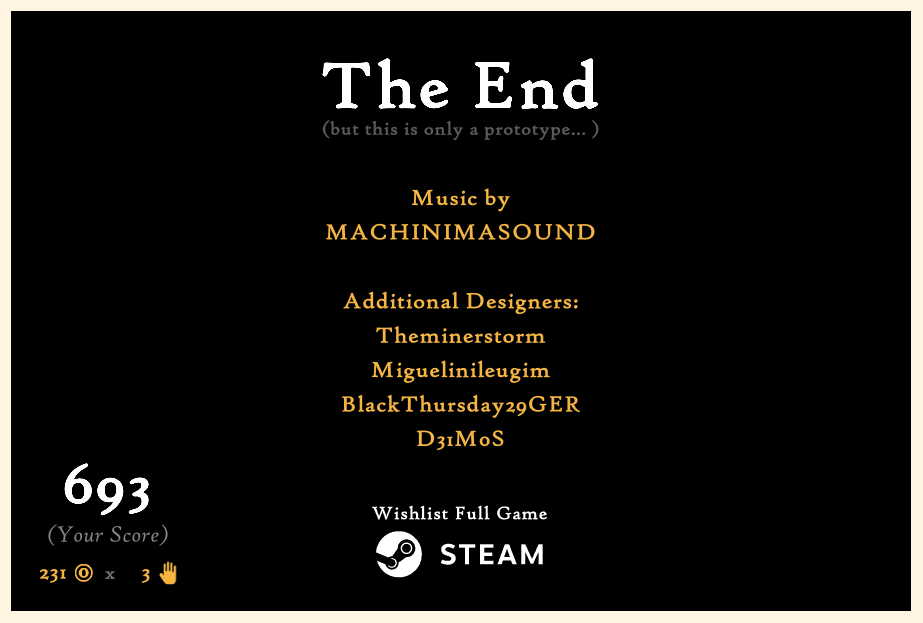 Wow! Great job! I think there is one person on the discord community with a better score. But it's really mostly about luck at that level.

Thanks. What was the score? Is the Discord public btw?

Yup, it's public, it's just a community discord, and I'm sharing development updates there and gathering ideas and feedback !
I'm pretty sure anyone above 700 cheated :(

Sure! :D
It's here: https://discord.gg/zGwhYvd

I got actualy 849 right now xD

i always wanted a game so simallar to this. Do i have my permisson to make some YouTube videos on this game?

Wow what a fantastic game! Simple but also unique and compelling. A couple comments about what some others have previously said.

-Some units seem to stray away from battle lines when the villagers are asking to be rescued. This is often problematic and breaks up lines and strategy.

- Secondly, the pause option is nice but I feel like it breaks up the game too much and too often. It would be a nice option for starting levels but as the game progresses it should be taken away especially if the game is ever is put into a multiplayer context. Also, maybe slow down the pace of the game if this is this is the case? Decreasing attack speed, and movement speeds could all be viable options for making multiplayer viable for molding this into more of an rts style game.

- Also, the movement options are very restrictive in my opinion. The meta, and way the mechanics work out with limited movement per cooldown incentivizes static gameplay from the majority of units. Although a fun strategy, it feels somewhat limiting. In my opinion, movement options ought to be more free where the speed at which that unit moves is determined by the unit type. Not where the unit type determines the distance it can move in a single turn.

- Finally, movement (as previously mentioned) and charge options should not be locked or on cooldowns. Charge in particular, should be associated with some cost/benefit calculation (ie. more susceptible to spearmen, ranged fire  while charging etc) but locking it really does not feel good and as mentioned before, is very limiting on strategic options.

- Like I said before, I see the biggest improvement in the game being made by taking away the pause function and slowing things down across the board so decisions can be made in real time and there is a bit more quick thinking involved. Other options like break free, armor up etc. should be locked up until a certain point. But the locking of charges, and the cooldown on movement is just too crippling for a strategy game like this.

The game has been incredibly fun, scored 200 something with outlaws and had a blast! I'm not sure if the developers intend on making it multiplayer, but if they do it would offer a vast amount of replay-ability, faction development, and competitiveness. Again thanks for a great game! If some of these things are considered I would be more than happy to drop money for a promising game like this.

if you have the itch app you can download it. even though it says downloading it works 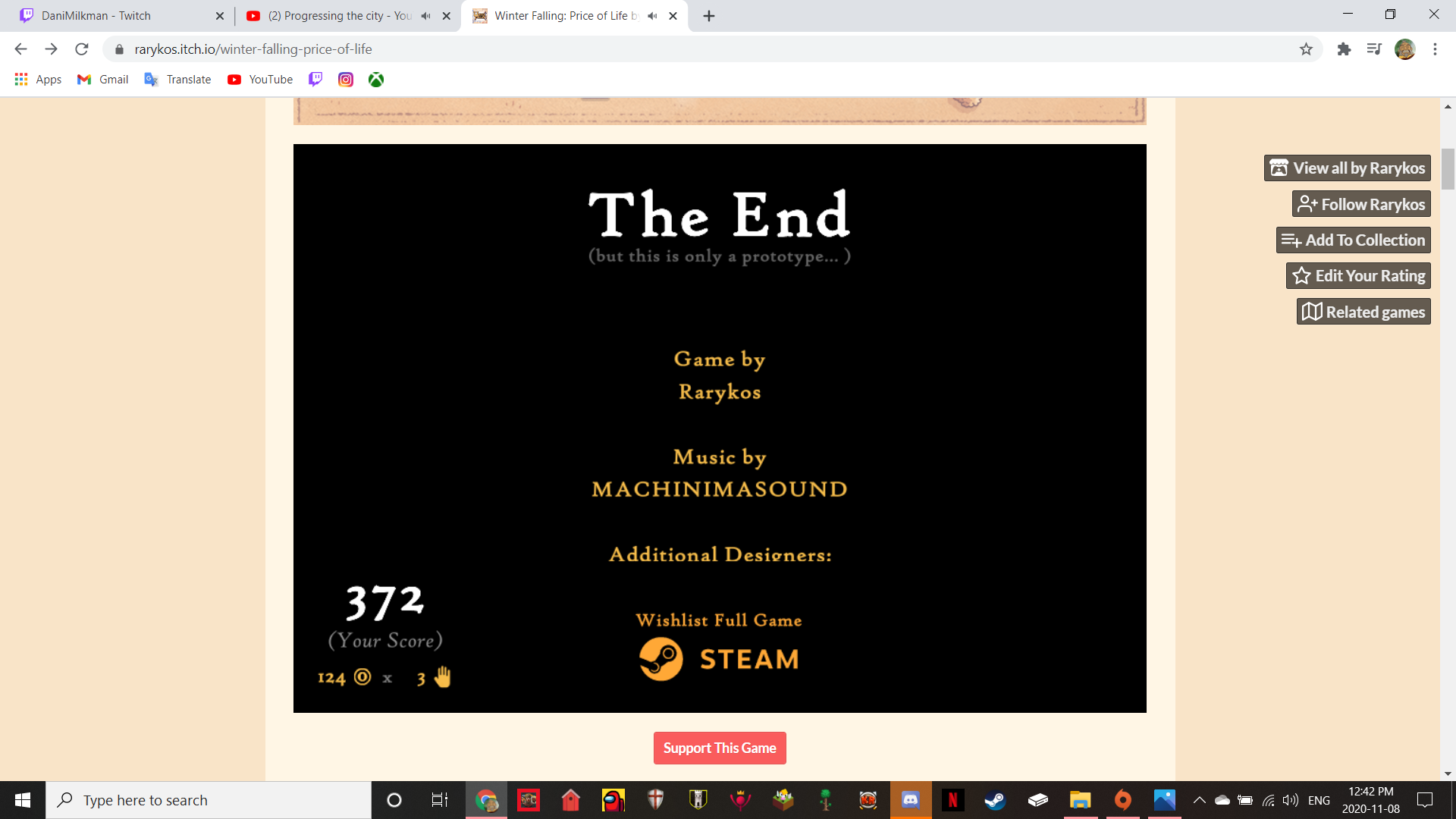 BTW I defeated the final boss on the hardest difficulty with 2  archers, and sold the rest of my army to get this score you might want to look into that.

That's the best strategy! Although there are a couple ways to win! 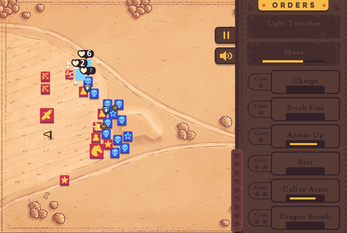 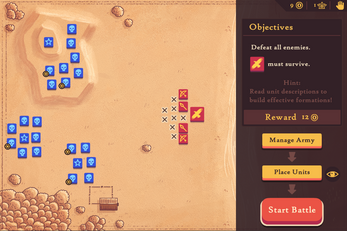 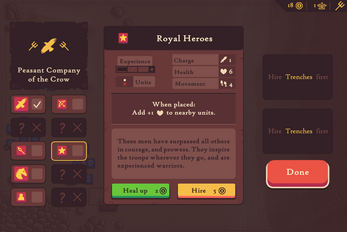 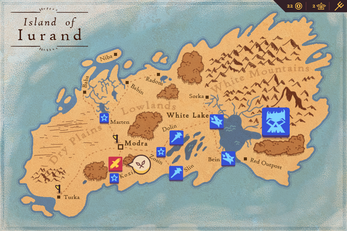 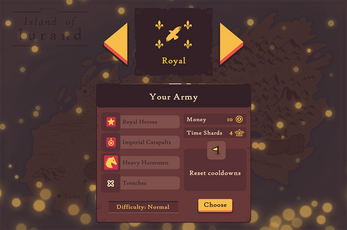 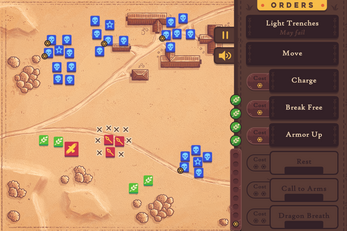 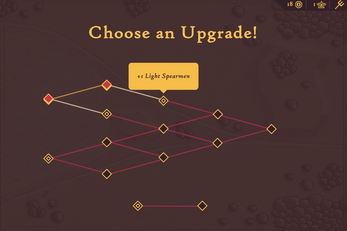 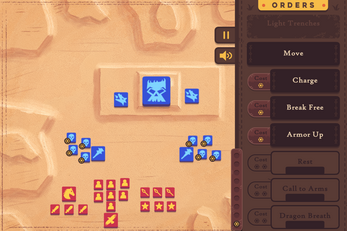 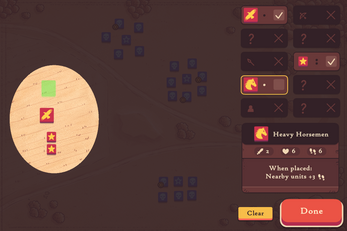 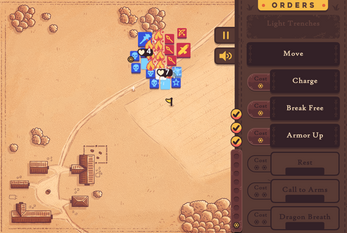